Today, January 23rd, is the Feast Day of Saint Vincent of Saragossa.  St. Vincent was a deacon and served as a minister and trustworthy pastoral assistant of Bishop Valerius, of Saragossa, Spain. He was martyred in the year 304 during the ferocious persecution of the Roman Emperor Diocletian. Saint Vincent is the most famous martyr of Spain, and St. Augustine testifies to this in his sermons that Vincent’s acts of love and loyalty to Jesus Christ, and service to the Catholic faith, were so respected that they were read and discussed in all the churches of North Africa.

Owing to the fact that Bishop Valerius had a speech impediment, Deacon Vincent was given the faculty to do all the preaching in their diocese. When the persecutions resumed, the Roman governor Dacian had Vincent and the bishop dragged in chains to Valencia where they were imprisoned. Bishop Valerius was subsequently banished, but Deacon Vincent, as a result of his preaching, was subjected to many cruel tortures such as the rack, the gridiron, and frequent scourging, all of which ultimately led to his martyrdom.

Legend tells us that even in death his murderers were not satisfied, for they threw his corpse into a field to be devoured by vultures; but, according to eyewitnes- ses, a raven defended his body by successfully fighting off the scavengers. His body was later buried and a chapel built over it.

In Vincent’s story we have the witness of a man who stood up, in Christian love and faith, to the might of a Roman imperial government that did all it could to destroy him in life and in death. They were so outraged by him because Saint Vincent would not renounce his sacred ordination to the diaconate, would not renounce the truth of the Church, and would not renounce Jesus Christ even in the face of unspeakable and savage tortures.

St. Vincent of Saragossa is a man who deserves to be recognized. If we review the images of this early Spanish saint, we see  a number that are sensitive and well-done, but it really is time to produce a new icon, or sacred image, of this great witness to the truth, love, and mercy of Jesus Christ. If you are a sacred artist or iconographer, and are interested in producing an icon or sacred image of St. Vincent, I will happily post it (with your permission of course) on this blog. He is a great model for all Christian young people today and we need an image of him that is contemporary to our age.

Come and join us, and like St. Vincent of Saragossa, have some of your art, or all of it, spread the Good News that the love, life, death, and resurrection of Jesus Christ has healed our broken relationship with God the Father! 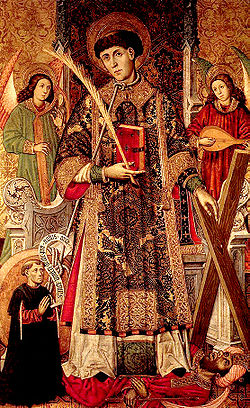 2 thoughts on “St. Vincent of Saragossa – Martyr – And An Artistic Challenge!”