Today is the memorial of Our Lady of Sorrows.

The Roman Breviary tells us that in a sermon by St. Bernard of Clairvaux he explains that “The martyrdom of the Virgin is set forth both in the prophecy of Simeon and in the actual story of our Lord’s passion. The holy old man said of the infant Jesus: He has been established as a sign which will be contradicted. He went on to say to Mary: And your own heart will be pierced by a sword.”

Yesterday, we celebrated the feast of the Exaltation of the Cross. That feast asks us to remember that it was through the Cross, through the violent execution of our Lord, that our redemption took place. The triumph of the Father’s love for His creation, and the Son’s sacrifice, was able to reorder a sin filled world.

As St. Andrew of Crete reminds us “the legal bond of our sin was cancelled and through His death we obtained our freedom and death was trodden underfoot.” Today, the Church in its wisdom again reminds us of the scene of Christ’s victory – and the people that witnessed it.

St. Bernard of Clairvaux eloquently reminds us that along with the death of Christ you have Golgotha being the scene of the martyrdom of Mary. He stresses the phrase, the martyrdom of Mary, because Jesus, as Mary’s child, held a unique and special place in her heart. This is true of the relationship of every mother to their child or children.

All mothers will tell you that every one of their children is special to them; all the more so with Mary, who knew and understood the role that her child was to play in our lives. So when the lance tore through His chest and entered His heart, the prophecy of Simeon, uttered so many years earlier flooded into her mind: “He has been established as a sign which will be contradicted, and your own heart will be pierced by a sword.” 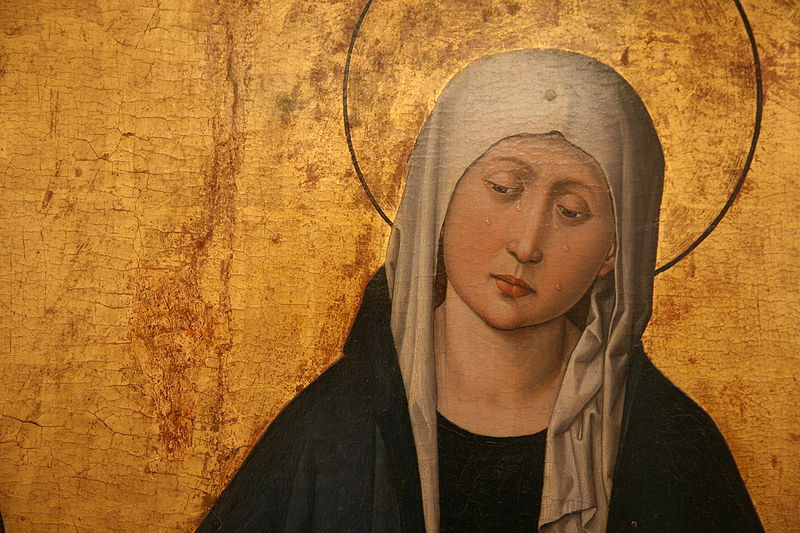 Mary witnessed the execution, she saw the spear tear through her Son’s lifeless body and the violence of that act ripped through her as well. Her body and soul filled with pain and, at that moment, she suffered the martyrdom of every mother who witnesses the death of an innocent child.

At Golgotha, watching the agonizing death of her Son, our blessed Mother, in obedience to the Father’s will for her life, stood by the Cross not only to witness the death of her obedient Son, but to hear her Son say that she was to now be the mother, not only of John, but all of us who believe in Him as Lord and Savior.

Through the sufferings of Mary, the mother of God, we have been made sharers in Christ’s passion. Through Mary’s original obedience to the Father’s will and invitation, we have be given the supreme gift of being able to participate in His Sacramental life, which enables us to share in His rising to everlasting life.

The Church has identified “Seven Sorrows” of Mary: 1) The prophecy of Simeon, 2) The flight into Egypt, 3) The loss of the child Jesus in the Temple, 4) The meeting of Jesus and Mary on the Way of the Cross, 5) The Crucifixion, 6) The taking down of the Body of Jesus from the Cross, 7) The burial of Jesus. 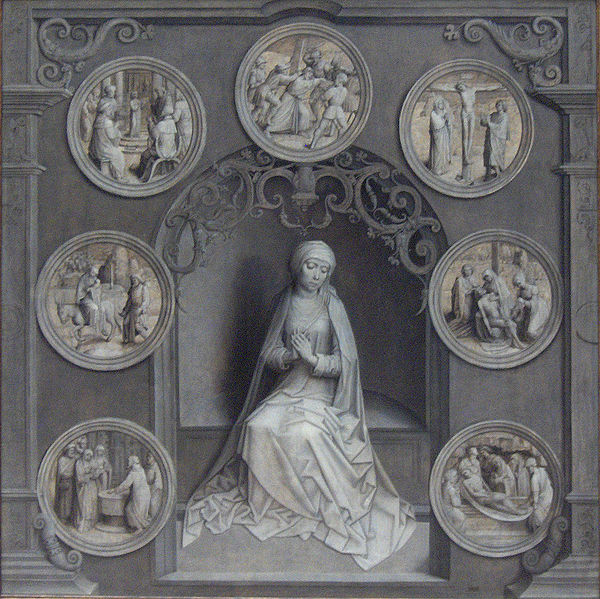 According to the 14th century visions of St. Bridget of Sweden, mystic and patroness of Europe, Our Blessed Mother Mary grants Seven Graces to all souls who honor her on a daily basis by saying seven Hail Mary’s and thinking about the above Seven Sorrows. The Seven Graces are: 1) Mary will grant peace to their families; 2) They will be enlightened about the divine mysteries; 3) They will be comforted in their sickness and assisted in their work; 4) They will be given additional graces as long as what the soul asks for does not violate the will of Jesus or the eventual sanctification of their own soul;  5) Mary will defend the soul in their own particular spiritual battle with the demons, and, will provide her protection to them; 6) The soul will be helped at the time of their death and will experience seeing the face of the Blessed Mother; 7) Mary told St. Bridget that she obtained these graces from Jesus so those souls who are in the state of grace and spread this devotion among their families and friends will be attain Heaven. 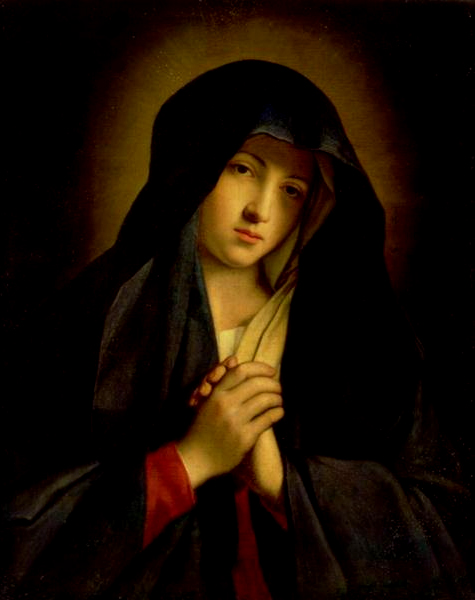 St. Paul’s 2nd Letter to Timothy (2: 10-12) directs us to the Scriptural truth of these ideas when he says, “I bear with all this for the sake of those whom God has chosen, in order that they may obtain the salvation to be found in Christ Jesus and with it eternal glory. You can depend on this: If we have died with him we shall also live with him; if we hold out to the end we shall also reign with him.” These words, while not said by Our Blessed Mother, were in reality, lived by her. 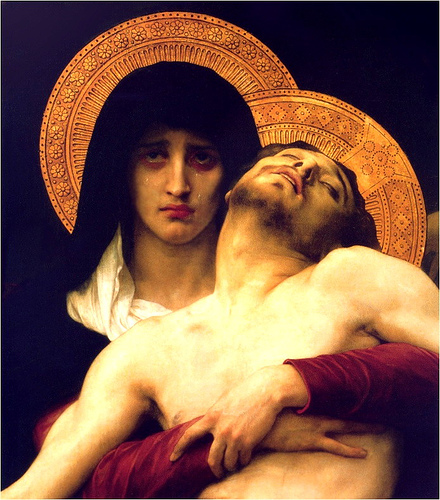 Copyright © 2012 Deacon Paul O. Iacono All Rights Reserved. Notes on the paintings: The first painting is an archetypal Gothic Lady of Sorrows from a triptych by the Master of the Stauffenberg Altarpiece, Alsace, c. 1455. The  second image is of a 15th century sculpture for a cathedral door showing the Seven Sorrows of Our Lady (by Adriaen Isenbrandt, circa 1490 – 1511). The third image, The Madonna in Sorrow, is by the 17th century Italian artist Giovanni Salvi (also known as Sassoferrato). The fourth painting is by William- Adolphe Bougereau, a French realist painter (1825 – 1905).