Floridian Sean Keohane, a member of the Fra Angelico Institute for the Sacred Arts, and a participant in the beautiful CBS/Paulist Production of “The Nativity” sent me the following information on an American television Christmas Eve Special that will be broadcast this Tuesday evening on CBS at 11:30 PM. You will want to set your DVR’s to record the show. I am sure that it will prove to be quite beautiful and a wonderful addition to your enjoyment of the holy Christmas season.  Sean is an artist and has been working with the famous Henson puppeters and the Jim Henson Creature Shop. He included a note and some pictures from Cheryl Henson that I would like to share with you.

Merry Christmas to all and best wishes for a safe and secure New Year, Deacon Paul and Jackie Iacono.

“A special note from Cheryl Henson:

I want to let you know about this special presentation of our mother’s puppet performance of “The Nativity” that will be a part of a CBS special on Christmas Eve. Heather Henson and I worked with Father Eric Andrews at Paulist Productions to remount this beautiful classic production as a tribute to Jane Henson. Mom had created this production over the past five years together with Heather and Sean Keohane in Orlando. The piece workshopped at The National Puppetry Conference at The Eugene O’Neill Theater Center. From there, Mom sculpted the heads for the first group of puppets which were then built and costumed by the New York Workshop. In remounting the show, the workshop made a few important additions, a bowing donkey and two shepherds among them. Vandy Wood designed a beautiful light weight set with a blue back drop dyed by Jason Weber. Everyone who worked on the show did a spectacular job.

We were blessed with an excellent team of performers who we know from shows we have funded through the Jim Henson Foundation and from the Henson workshop. Amanda Maddock directed the puppets for the television production, working with storyboards from Sean Keohane and Heather Henson. Chris Green, Erin Or, Eric Wright, Ulysses Jones, Yoko Myoi, Amy Rush joined her as puppeteers, delivering elegant breath taking performances.

We couldn’t be prouder of how this came together quickly to create a lasting tribute to our mother. There will even be mini documentary tribute to Jane included at the end of the commercial free hour. In addition to Jane Henson’s puppets, the show also includes the kites of Curtiss Lee Mitchell, flown by Curtiss and Heather Henson. The extraordinary spirit kites that they performed at mom’s service in April take flight over three spectacular songs; “Ave Maria,” “Silent Night” and “Joy to the World.” Everyone on the production agreed that all church services should include kites. They help the spirit soar!

We miss our mother and are glad to be able to celebrate her this holiday season. Please tune in or record this production if you can. Happy holidays and thank you for being a part of this community that she loved so much. 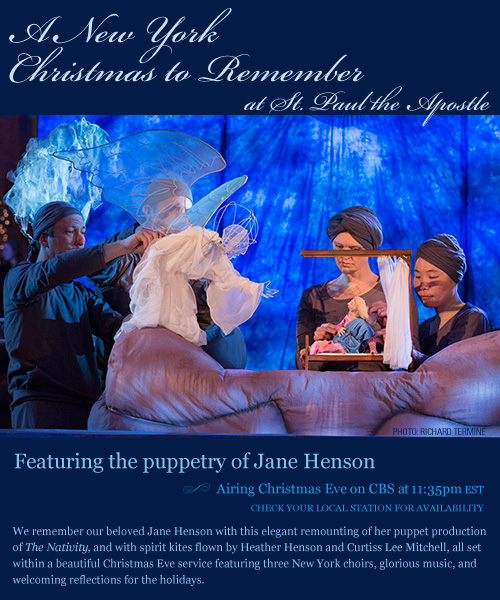 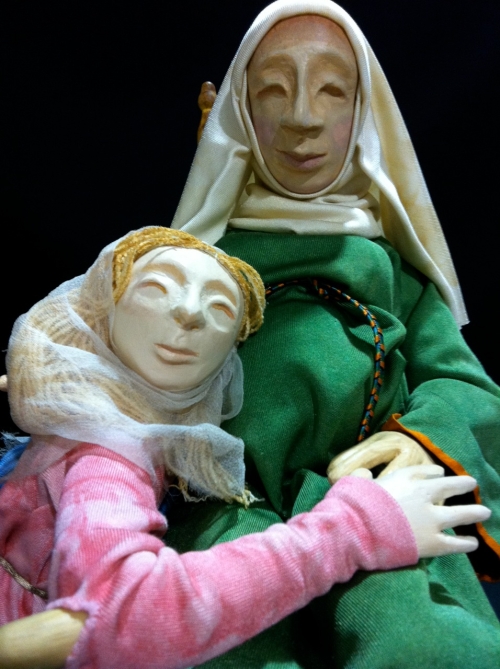 Deacon Paul O. Iacono is an ordained Roman Catholic deacon from the Diocese of Providence, Rhode Island USA. The purpose of this "Institute" is to evangelize, catechize, and promote the prayerful creation of sacred art in the Western and Eastern Rites of the Catholic Church. In 2010, Deacon Iacono received a blessing of this ministry from his Excellency the Most Reverend Thomas J. Tobin D.D., Bishop of the Diocese of Providence, Rhode Island USA. View all posts by Deacon Paul O. Iacono