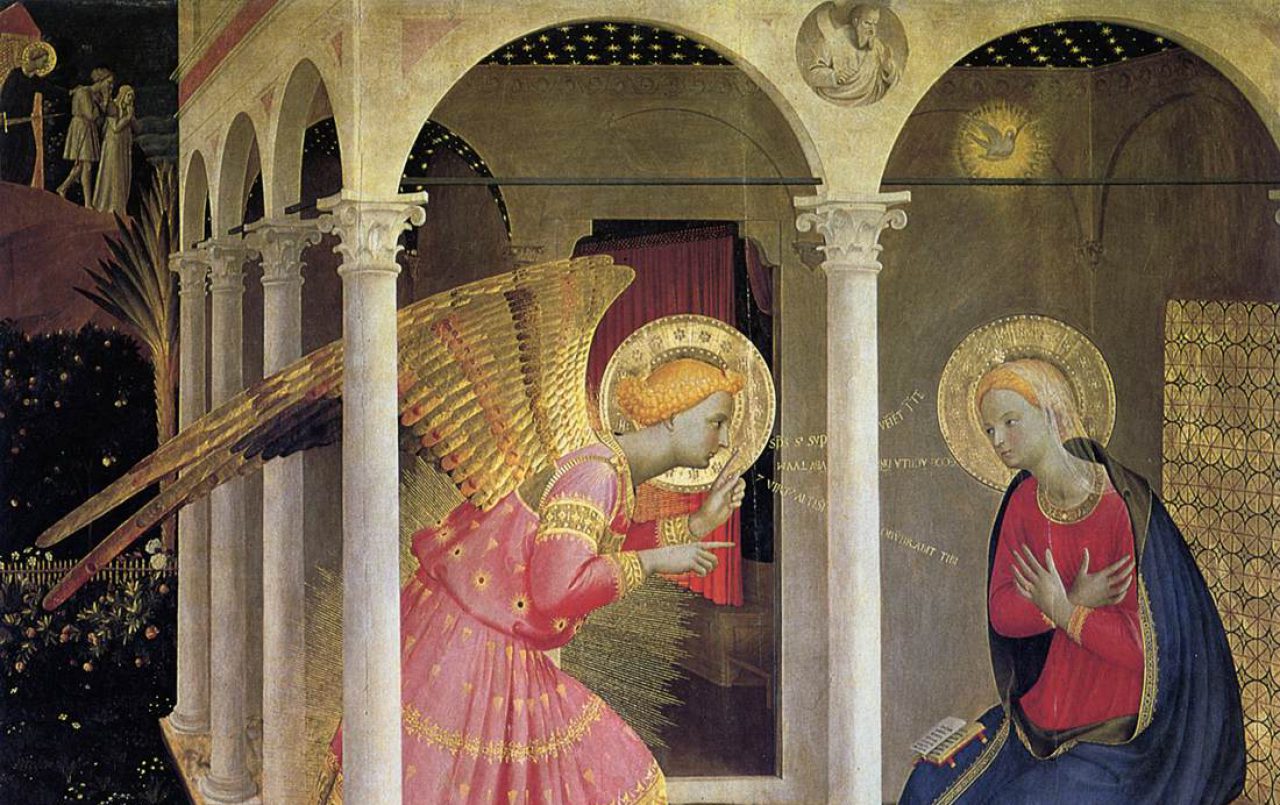 The question may be asked “How is the word “spouse” used in reference to Mary and the Holy Spirit?

We have all read the nativity accounts of St. Matthew and St. Luke and if you are a Roman Catholic you believe that Sacred Scripture is the foundation on which we build our theology; however, Sacred Tradition and the scholarship and teaching of the Magisterium of the Church are also very important.

Sacred Tradition, scholarship, and the Magisterium (the teaching authority of the Church) act as the counterbalance for our understanding of God’s Truth in Scripture. These elements, together with Sacramental grace, prayer, and good works help us live our life in Christ.

Theologians, saints, and mystics have used marital language to express the love of God for His Church and the mystical relationship between our Blessed Mother and the Holy Spirit. The use of marital language in relation to Mary, the Holy Spirit, and the Church has a long and varied history. A few recent examples of a pope and documents of the Church using this language are Pope John Paul 2 in numerous homilies and encyclicals, and the very important document that resulted from the Second Vatican Council entitled The Dogmatic Constitution of the Church – Lumen Gentium.

If we go back to the earliest writings of the Church, and quickly examine some sources, we see the “marital and spousal” aspect of this mystical language used in a second century AD document called the Odes of Solomon; and as we proceed up through history we see mention of it in the writings of St. Augustine (4th century), St. Ildephonsus, archbishop of Toledo, Spain (7th century), St. Germanus, patriarch of Constantinople (7th century), Cardinal St. Peter Damian (11th century), St. Bonaventure (13th century), Emmanuel d’Alzon (19th century), and, in the many scholars of the 20th century, such as Cardinal Joseph Suenens, Karl Rahner, Pope John Paul 2, Rev. Peter Damian M. Fehlner, F.F.I., and Pope Benedict 16th.

A few examples of how the word “spouse” is used in these theological contexts may be helpful. In 1979, on Pope John Paul 2 first pilgrimage to the United States, he gave a sermon on our Blessed Mother at the National Shrine of the Immaculate Conception and made this point in relation to Mary:

“…Through her, the Sun of Justice was to rise in the world. Through her, the great healer of humanity, the reconciler of hearts and consciences, her Son, the God-Man, Jesus Christ, was to transform the human condition and by his death and resurrection, uplift the entire human family. As a great sign that appeared in the heavens, in the fullness of time, this woman dominates all history as the Virgin Mother of the Son, as the Spouse of the Holy Spirit, and as the Handmaid of humanity.” (excerpted from Mary’s Yes – Meditations on Mary Through The Ages, edited by John Rotelle, O.S.A., Servant Press, Ann Arbor, 1988) 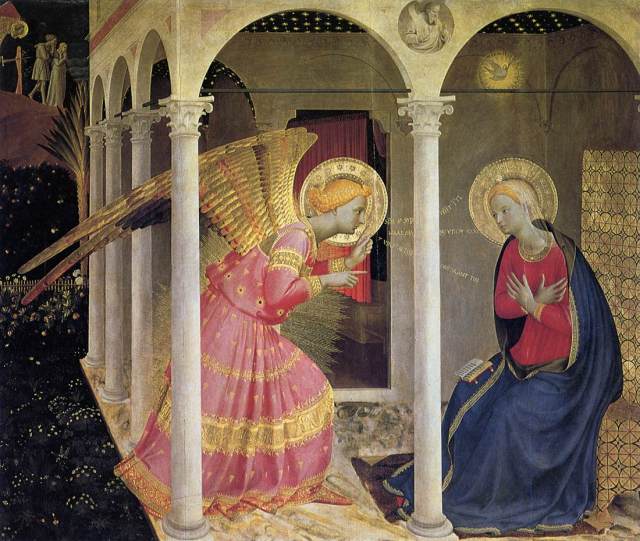 In his important 1986 encyclical on the Holy Spirit  “The Lord and Giver of Life” (Dominum et Vivificantem) Pope John Paul 2 continues to use these expressions to help explain his insights:

“…It is the [2nd Vatican] Council that says to us: “The Blessed Virgin…overshadowed by the Holy Spirit…brought forth…the Son…, he whom God placed as the first-born among many brethren namely the faithful (cf. Romans 8: 29). In their birth and development she cooperates with a maternal love”; she is through “his singular graces and offices…intimately united with the Church…. [She/Mary] is a model of the Church” (Lumen Gentium, note 63). “The Church, moreover, contemplating Mary’s mysterious sanctity, imitating her charity,…becomes herself a mother” and “herself a virgin, who keeps…the fidelity she has pledged to her Spouse. Imitating the Mother of the Lord, and by the power of the Holy Spirit, she preserves with a virginal purity an integral faith, a firm hope, and a sincere charity” (Lumen Gentium note 64).

Pope John Paul 2 continues, “Thus one can understand the profound reason why the Church, united with the Virgin Mother, prays unceasingly as the Bride to her Divine Spouse, as the words of the Book of Revelation, quoted by the [2nd Vatican] Council, attest: “The Spirit and the bride say to the Lord Jesus Christ: Come!” (Rev. 22: 17). 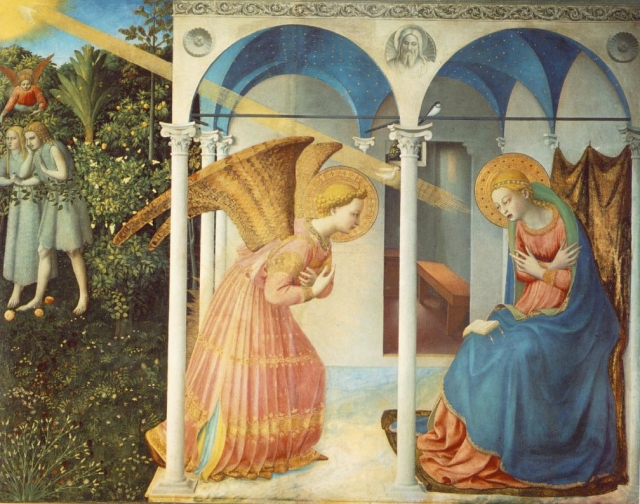 So, we see in these few examples that the Church has used this type of mystical language to help express and make meaningful the divine union of Mary and the Holy Spirit. This, of course, was made possible by Mary’s humility, and the grace of the Holy Spirit which fashioned Mary from the moment of her conception.

God has given Himself as a divine Gift to mankind. This mirrors the gift of self that a husband and wife make of themselves to each other; or, the gift that a consecrated virgin makes of him or herself to God. Our eternal destiny has been played out on this field, for with mystical insight we understand that a divine proposal was made to this young woman Mary, and using her free will and reason, she consented to the request to become the Theotokos – the Mother of God. It is important to remember that she consented, in humility, and out of her profound sense of love, service, and faith in God. These are the characteristics of all consecrated virgins, and the characteristics of all faith-filled wives and husbands who freely give the gift of themselves to their spouse in recognition of their marriage covenant.

At the moment of her “Let it be done to me according to your word,” her Spouse, the Holy Spirit, dwelt within her and uniting with her blood conceived the child Jesus in her womb. This was the divine act of conception – the miracle of  the Incarnation – resulting in a natural child and the full flowering of Mary’s motherhood. In practical terms, her consecrated virginity was not disturbed. She was an immaculate virgin before, during, and after her pregnancy. During her pregnancy and after the birth of Jesus, the Holy Family was exactly that – a holy family. Her legal husband Joseph understood and respected her vow of consecrated virginity, and she dedicated herself to being a model wife and mother – a woman who supported her husband Joseph in his work and her Son, Jesus, in His future ministry. 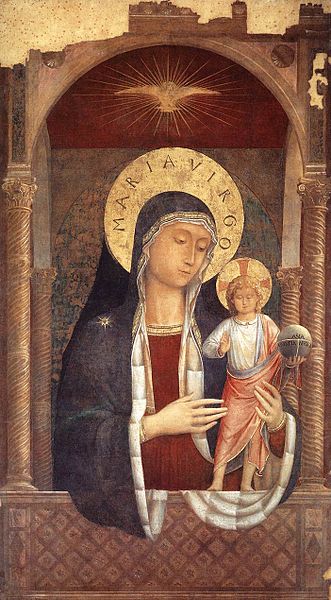 Glory and Praise to God! Praise be to the Mother of God, Mary, most holy! May she always intercede with her Son for mercy on our behalf!

Notes on the paintings: The first painting of the Annunciation is by Fra Angelico (Brother John of Fiesole, died 1455) and is done in egg tempera on wood; completed between 1430-32 it is found in the Museo Diocesano in Cortona, Italy. The second painting is also by Fra Angelico it was painted between 1430-32 and is done in egg tempera on wood. It measures approximately 76 inches by 76 inches and hangs in the Prado Museum in Madrid. The third painting is by Benozzo Gozzoli entitled Madonna and Child Giving Blessings.  Painted in 1449, it is egg tempera on silk and mounted on wood. It is currently located in the church of Santa Maria Sopra Minerva in Rome. It is approximately 100 inches high by 51 inches wide.