One of the great blessings the Lord has granted me is the privilege of meeting so many wonderful people who are interested in studying and creating sacred art. An example of this is the fine Rhode Island artist, Lesley Green.

Lesley is no stranger to art. She has been interested in it since adolescence and received a BFA from the Rhode Island School of Design. She continued to pursue her studies while taking time out to marry and raise a family.

I first met Lesley a number of years ago, when my wife and I started the Fra Angelico Institute for the Sacred Arts.  We invited people from around the Diocese of Providence to come to our first informational meeting. I could tell upon first meeting her that she was highly motivated to consider studying and prayerfully create sacred art.

My first workshop in sacred art soon followed that meeting and Lesley came to learn the basics of how to paint a sacred icon. Her excitement and interest were, and still are, gratifying to see. She continued to make rapid progress with me and took the advice that I give to all of my students: “Branch out, and study with as many other sacred artists as you can.”

I firmly believe that a sacred artist needs to be exposed to, not only a variety of artistic talents and skills, but to the prayerfulness of other iconographers as they practice their ministry in sacred art. As a result, she has since enjoyed studying with Rev. Peter Pearson and Michael Kapeluck, two artists from Pennsylvania who paint in the Russian Orthodox style.

Lesley realizes that her art is more than art for art’s sake. As a committed Roman Catholic she understands that her art is a dramatic form of silent evangelization of the Word of God. She takes seriously the invitation of St. John Paul 2’s 1999 Letter to Artists to participate in the “call” to the vocation of a sacred artist. He tells us that in doing so we fulfill our personal responsibility to do our part in spreading the Good News of Christ. He says,

“In order to communicate the message entrusted to her by Christ, the Church needs art.  Art must make perceptible, and as far as possible attractive, the world of the spirit, of the invisible, of God.  It must therefore translate into meaningful terms, which is in itself ineffable.

Art has a unique capacity to take one or other facet of the message and translate it into colors, shapes and sounds, which nourish the intuition of those who look or listen. It does so without emptying the message itself of its transcendent value and its aura of mystery.”

Lesley’s most recent completed icons of Saint Gabriel and St. John the Baptist are quite lovely. I especially like the fact that St. Gabriel is shown holding the Holy Eucharist. As you know, the Archangel Gabriel was depicted in the Hebrew Scriptures as being a healer, especially of the eyes. This sacred icon aptly shows that the source of the Archangel’s power is Christ Himself. The second icon showing St. John the Baptist in a prayerful pose indicates that even in Heaven he continues his mission of imploring us to repent of our sins.

St. Gabriel the Archangel and St. John the Baptist, pray for us. 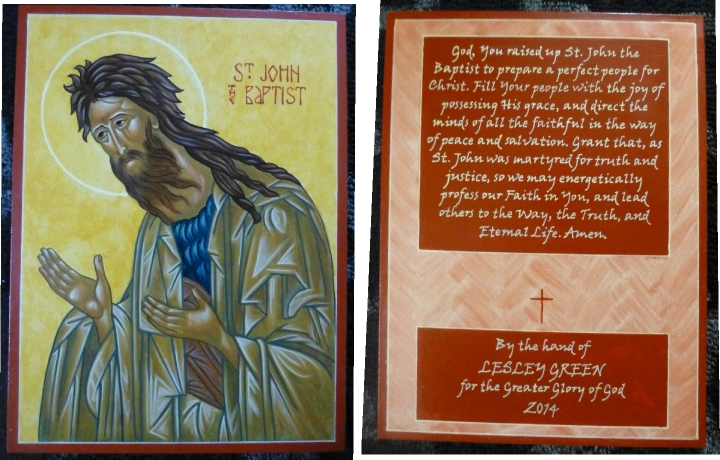