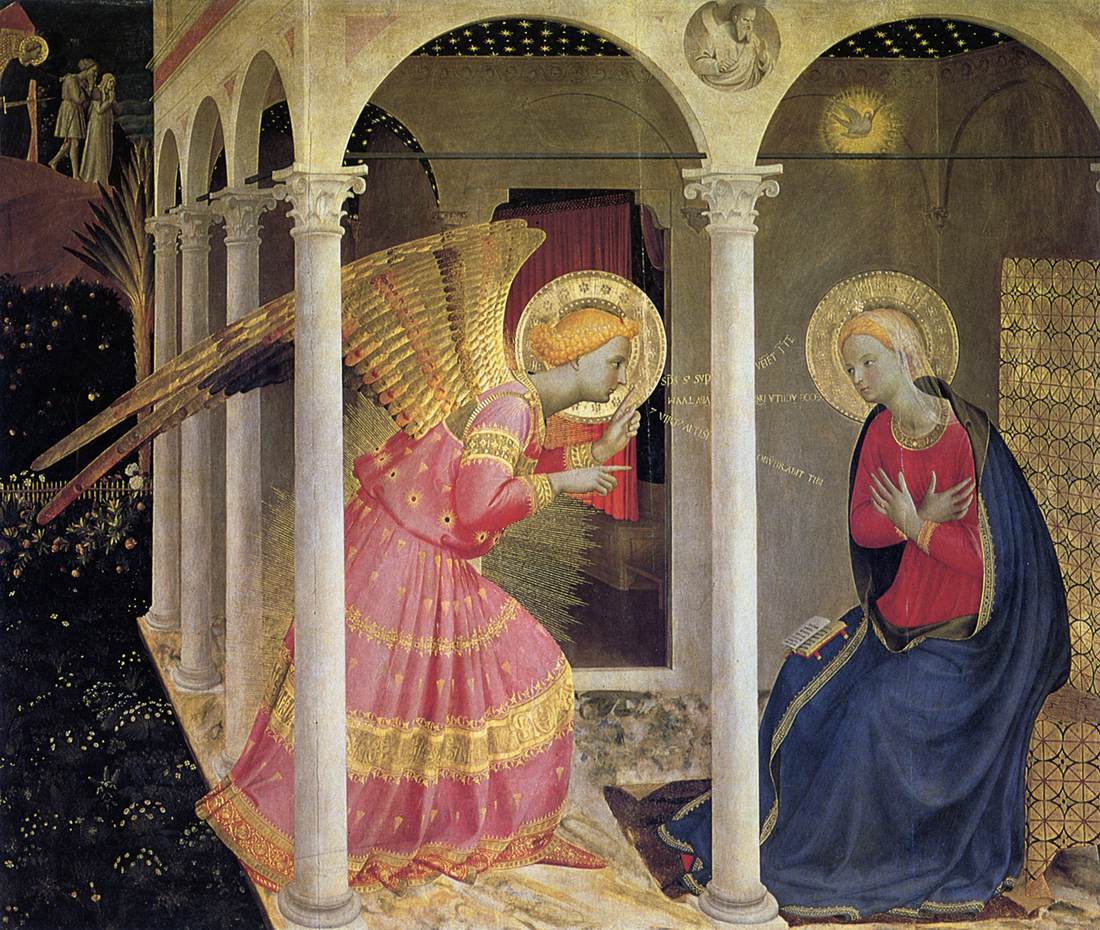 A very clear narrative greeted us in yesterday morning’s Gospel by St. Luke. He tells us that both Zechariah and his wife Elizabeth were both righteous before God: walking in all the commandments and ordinances of the Lord – they were blameless; but they have no child. Elizabeth was barren and both were elderly. We read of Zechariah silently bringing his heavy heart before the Lord – even after all those years – it was still burdened with disappointment. The couple probably remembered Psalm 112 which says:

“Happy the man who fears the Lord, who takes delight in his commands. His sons will be powerful on earth; the children of the upright are blessed.”

Zechariah was a priest, and on that day – by lot – it was his turn to enter the chamber within the Temple called the Holy Place and burn incense on the special altar. The Holy Place was a small chamber that led to the Holy of Holies, which housed the Ark of the Covenant.

For whatever reason, Zechariah that morning carried his disappointment with him into the Holy Place; and while he was there the archangel, Gabriel, appeared on the right side of the Altar of Incense. Gabriel tells Zechariah not to be afraid and that his prayer was heard before the throne of God. Gabriel continues with the joyous news that Elizabeth will bear a son, and that he will be called John – which in Hebrew means – “the Lord is gracious.” This child will grow and be great before the Lord, and even from his mother’s womb – he will be filled with the Holy Spirit.

But, in a typically human way, Zechariah questions the archangel’s announcement. His query must have been different in tone. It must have had the typical masculine attitude of “Are you kidding me!” Zechariah’s tenor makes Gabriel, and possibly God, indignant – and Zechariah is struck speechless for his insolence.

In Scripture, few lines later, we see Gabriel’s announcement to Mary. She questions him, too, as “How can this be since I do not know man?” But Gabriel does not strike her speechless. We have to be struck by this difference. What does it teach us?

It is clear that God knows our hearts. God knew what was on Zechariah’s heart when he was in the Holy Place. Zechariah does not trust the message or the messenger, and by inference – he does not trust God. God knows his heart; and disciplines this good man. Like Zechariah, we, too, may disbelieve God. In our sophistication or position in life we may say “Well that’s fine, but, the Scriptures don’t apply to our situation, or this specific teaching was acceptable years ago, but, too much time has passed and it doesn’t apply to my problems. Remember, the Gospel says that Zechariah and his wife were good and righteous people. It was mentioned that he kept all the Commandments and ordinances. Yet, when his big moment comes – where is all that goodness and righteousness? It might still be there in his heart, but, there was also a pocket of doubt – a crevice of skepticism – that was significant enough for him, as a priest of the Almighty God, to be struck speechless in punishment for not trusting Gabriel’s message.

As sacred artists, as Christians, this Gospel asks us to stop, and check our souls in this last week of Advent. It asks us how patient, confident, and trusting have we been of the Lord’s message to our hearts, and have we allowed this to carry over into our actions?

Zechariah learned the hard way that when the Lord prepares us for His coming He desires us to be alive, awake, and alert to His call and to trust His message. So, our prayer this week should echo that of Zechariah, who in the months of speechless waiting, most likely in his mental prayer said,  “Lord, I believe; cleanse me of my disbelief. Lord, I trust, heal me of my distrust;” and it should also echo that of Mary – who in humility and expectation waited patiently for the graciousness of the Lord to take fruit in her womb. 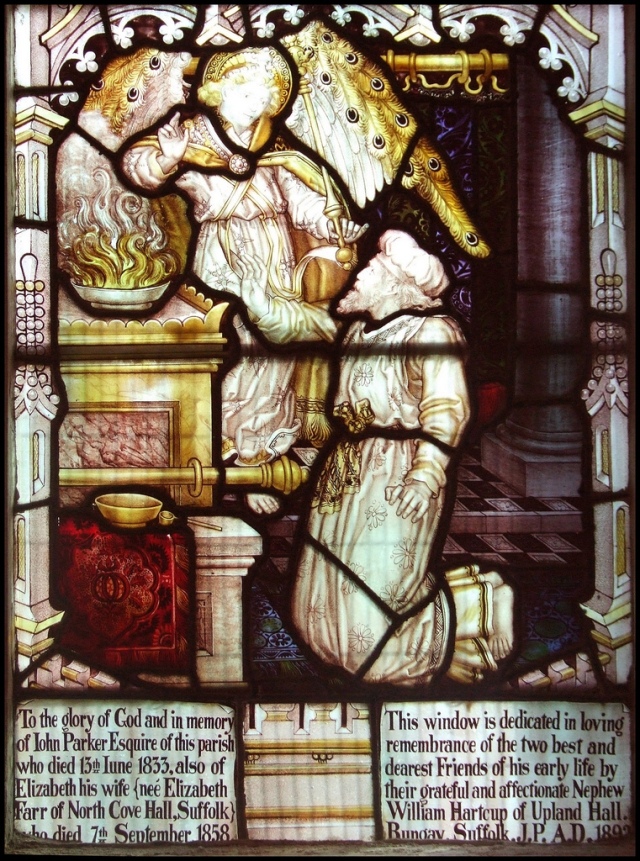 Thanks to angels-angelology.com for stained glass window image.

One of the first St. Francis of Assisi parishioners to contact me to become a member of the Fra Angelico Institute for the Sacred Arts is a wonderful lady and artist by the name of Valerie Szlatenyi. In our discussion she shared with me the work she had recently done for the Wakefield Baptist Church Memorial Garden here in Wakefield, Rhode Island. The work is a large garden mosaic casting in glass and stone. It appears in a quiet corner on the Baptist Church yard grounds.

Valerie described the process she went through as she decided upon her composition for the church yard. She mentioned “Like a voice talking,” an impression “came to me that a mosaic dove would be part of the garden.” At first she wasn’t sure how to do it but she resigned herself to forge ahead and listen to her Muse.

It wasn’t a simple task, details of the dove began to fill her mind, and she realized that careful planning was essential for it to be a success. Combining prayer, with the assistance of a friend, she made numerous visits to the Atlantic coastline a few miles away and began to reflect on the shapes of the various stones that she was collecting.

An assortment of shapes, sizes, and shades of color, all began to fill her mind with impression that some of the stones had characteristics of various human personalities in that some were worn, some scarred, and some smoothed with the passage of time. The rough and tumble of countless waves, sand particles, and fellow stones sliding, and sometimes crashing into them, forever changing their appearance.

Valerie’s meditative trips to the shore helped her formulate her design which required stones of various quality, texture, and definition. In some cases she could see that the stones were made better for all the tumultuous behavior they had undergone. New lines of grain were exposed: mica, colored granite, sedimentary rock, or various minerals long hidden after eons of time now exposed to the elements of sea, wind, and sand. It was as if the best of the stone had to be burnished by nature – and nature’s God – in order to show its true complexity; the life of the seashore mirroring the life of the land walkers.

Like Valerie, my wife and I enjoy walking the beautiful Rhode Island beaches that face the Atlantic Ocean. We are amazed at the lovely collection of small stones and rocks that at times appear after an especially violent storm. Our imaginations kick in when we come across broken, yet harmless, sea glass.

Colored glass has a unique role to play in the enjoyment level of many beachcombers. Especially along the Atlantic Coast we are probably all impressed by their similarity to jewels from the treasure chests of long dead pirates. They sit at the shoreline, under a clear blanket of water, shimmering in the afternoon sun – beckoning you to pick them up and rejoice at your good fortune.

Valerie decided to center her creative efforts on composing a mosaic dove for the local church’s healing and prayer garden. She explains that the dove has always been a symbol of peace, love, and purity. Expanding the symbolism out onto a theological level, we can say that the dove, as one of the symbols for the Holy Spirit, is a representation of God’s love and grace coming to those who participate in the Sacramental life of the Church. Her composition also asks us to find the three feathers on the neck of the dove. She explains that they represent the Father, Son, and Holy Spirit united in love. The heart of the dove expresses the never ending love of the Father for the Son and the Son for the Father – and united as the Holy Trinity – their love for us.

Well done Valerie, it is a beautiful and inspiring composition. 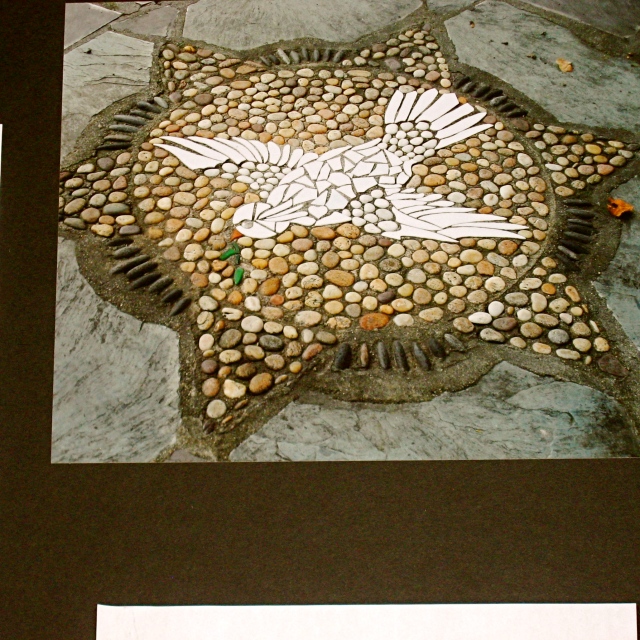