Over the past six years I have participated in numerous workshops in sacred art and have produced a number of sacred images, each of which helped me understand the techniques of this sacred art.

In 2006, I participated in my first workshop at St. Michael’s Institute of Sacred Art at St. Edmund’s Retreat in Mystic, CT. The instructor was Peter Pearson, an Episcopal priest from Pennsylvania. He introduced the class to the beautiful and prayerful experience of painting a sacred image in the Russian Orthodox tradition; however, rather than using egg tempera paints (in which you mix the yolk of an egg with natural earth and mineral pigments) he taught the techniques using acrylic paints.

A note on acrylics versus egg tempera pigments. I personally believe that they are both valid materials to use. I have studied and painted images in each of these techniques and I personally do not have a solid preference, although, I believe it is helpful for a student to learn the techniques in acrylic first and then study sacred imagery using egg tempera pigments. I find both materials – natural or synthetic colors – enjoyable.

There are some people in the Internet community who become quite exercised over the fact that there are artists creating sacred images using acrylic paints. It is not necessary to get into, as Pearson would say, “the egg wars” debate, other than to mention that all sides are respectfully entitled to their opinion. Neither the Catholic or Orthodox faith exclusively owns sacred art, imagery, or iconography. Church art has always been (for at least the last 1500 years) an outgrowth of the Catholic and Orthodox creative spirit desiring to unite art with prayer. It was certainly part of the early tradition of the Roman Catholic Church prior to the winds of Western civilization moving the Catholic artists’ barque into Gothic, Renaissance, and Baroque ports of call.

In the late 20th and early 21st century, a growing element of the sacred art tradition of the Roman Catholic (and the Eastern Rites churches which are in union with Rome) has revolved around reestablishing traditional sacred imagery and iconography as part of the Catholic artistic heritage. Sacred iconography has always been a part of the Orthodox churches liturgical tradition, and they are to be saluted and commended for keeping the bright light of this sacred art tradition alive within the Church community.

It is probably part of the Western European/American mindset to accept and utilize new developments in artistic materials and techniques. This is why I believe some of us do not have any problem using acrylic paints. Acrylics are synthetic paints (composed in a lab) rather than natural earth or mineral pigments. My personal spirituality does not think that the Lord is concerned with the materials used in prayer, rather, He is interested in the intent and the creative outcome of that sincere prayer. You use what you think works, have fun with, and is readily available. There are many ways to catch a fish – as the Lord said to Peter – “throw out your nets again!”

So, on a practical level acrylic paint can be fun to work with, but it can also be problematical. Years ago Peter Pearson recommended a line of paints to us from the Chroma company called JoSonja. These paints are primarily used in the decorative crafts, yet, because of their color lines, they fit the bill for painting in a more traditional way – similar to the Russian tradition. By this I mean that the Russian Orthodox colors are primarily muted, unlike the Greek Orthodox who had a wide range of brilliant colors to choose from for their artwork. Geography and geology play an important part in understanding the color palette and artistic techniques of a civilization.

The nice thing about the JoSonja line of paints (available at DickBlick.com and other outlets such as Jerry’s Artarama) is that they are inexpensive but of surprisingly good quality. They also have an entire range of mediums, (such as flow medium and glazing medium) which are essential in getting the results you want, especially for the multi thin layering and highlights of the image’s face. The JoSonja line has also produced a polyurethane satin varnish that compliments the chemistry of the paints and mediums in their line. It was used on my sacred image for the recent workshop and went on without any problem. I applied this varnish with a one and one-half inch flat wash brush from Princeton Art and Brush Company (item # 4050 FW). It has very fine and soft bristles – perfect for streak free varnishing. I must give you a warning: work quickly as the varnish dries rapidly. It is non toxic and cleans up with soap and water.

I produced a manual for the workshop which explained each step, yet, found myself talking more than I really wanted to, owing to the fact that this was the participants first sacred image, and for many, their first venture into art in many years. A sacred image workshop should be a place in which the participants can enter into prayer while they paint; hopefully, the next workshop will more conducive to this necessary element.

All the adult participants were very good sports and reacted with quite a bit of patience to some of the more difficult parts of the process. They were all happy with the results and want to embark on another workshop – which is good news! Please find below a few photos from the workshop and the Mass at which the sacred images were blessed. You can see the images in the sanctuary in front of the altar. I am behind the altar to the left vested in a green dalmatic, and Father Joseph Upton the Institute’s chaplain, has his hands raised as he recites the blessing over the sacred images. Thanks again to everyone who participated and see you soon! 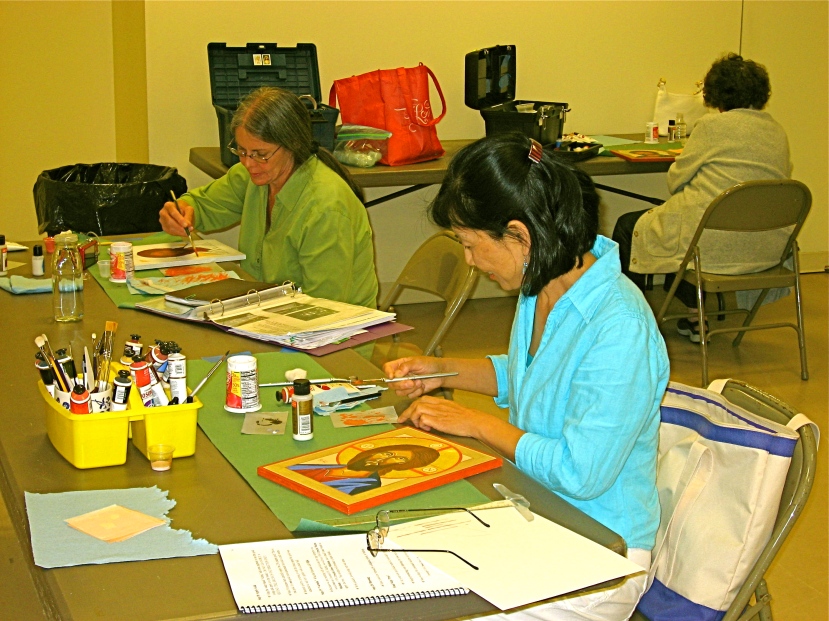